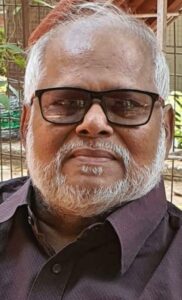 Bennet Benjamin was the 11th child born on 21st April 1944 to the parents Rev. Job Benjamin and Mrs. Muthabaranam Benjamin in a village in Tamil Nadu (Pre-independent).  He did schooling wherever his parents moved for mission work. After his University which aptly concluded with a Cultural History of India and Politics, he began his work in the field of Cottage Industriescarrying our research through field studies on Arbovirus Research Centre – A Rockefeller–ICMR-VRC Project (1966-1970) at CMC Vellore. He worked as programme Secretary at Student Christian Movement in India (SCMI). He joined Christian Institute for the Study of Religion and Society (CISRS) and the Ecumenical Christian Centre (ECC) left the comforts and the extensive luxuries of Bangalore to move to Tirupattur from where he developed his work in the Yelagiri Hills living among the native people. Bennet lived and worked for four decades. He founded and directed the Centre for Rural Health and Social Education (CRHSE) in 1978 and worked extensively in the field of Education & Literacy, Health & Nutrition, HIV/AIDS, Micro Small & Medium Enterprises, Rural Development & Poverty Alleviation, and Women’s Development & Empowerment.

His knowledge and insights made him an important resource person at conferences and seminars at local, national, and international level. Many of these were with civil society, but his contributions to the ecumenical movement, including the World Council of Churches, Christian Conference of Asia, National Council of Churches in India, YMCAs of India, and as Senior Friend in the Student Christian Movement. Busy as he was, he wrote frequently in journals, and other publications through which he influenced social thinking. For, these constituted his various niche areas – Social thought, ecumenical visioning, and Development Alternatives.

In the professional arena, he was much sought after in the ecumenical circles and in civil society by numerous organizations that were engaged in questions of development, human rights, inter-cultural studies, labour issues, and youth work. A large portion of his work was grassroots and justice oriented. Bennet was not just a campaigner and advocate for the dispossessed the Dalits, Adivasis and Backward Communities, he combined intellectualism with activism. He emerged as a Development Consultant at the national and global level taking his creative skills and energies to make a better world for those who were poor, disempowered, and requiring to acquire and enhance their capacities for their quality of life. He landed up at each locale where he was needed with all his proficiency and wisdom.

In recognition of his life and work, he was awarded the Doctor of Divinity(Honoris Causa)by the Academy of Ecumenical Indian Theology and Church Administration, Chennai, India in 2002 for distinguished contribution for the life and witness of the Church in Society. He also received the Doctor of Honours (Social Work) from the Open International University for Complementary Medicines, Colombo, Sri Lanka, 2007 for excellence in Social Development and Community Empowerment.

The depth and range of Dr. Bennet Benjamin’s experiences brought people to his doorstep and him to theirs. He never, even once, acted like the expert who had come to resolve the issues of people. When he chose a place to work, he would say: “I want to learn what the people know and share with them I know. Together we find ways to transform situations of oppression and disadvantage. It was, in this sense, that Bennet chose the build pathways of justice and dignity for people in the margins and who were submerged by discrimination and prejudice.

His life and witness is multi-faceted and punctuated by manifold accomplishments.  For a person so widely accomplished, he remained a humble and most approachable ‘guru’ to anyone who wanted to enhance their own knowledge.

God chose to take him back on the 4th of August 2021possibly reckoning that he had done his share of witnessing to God’s calling in the 77 years of his distinguished life. Bennet will be hugely missed. But the traces of his work and legacy will remain ingrained in the thoughts and minds of those who encountered for generations to come.  We have lost a wonderful person but he now sits in God’s garden picked as one of special roses.  Sheila, his devoted wife, Anju, his loving daughter, Bobby his gentleman son-in-law and Akshu his wonderful granddaughter will miss Bennet but continue to lead the legacy of his faith, love, care and dedication to build a humane society.